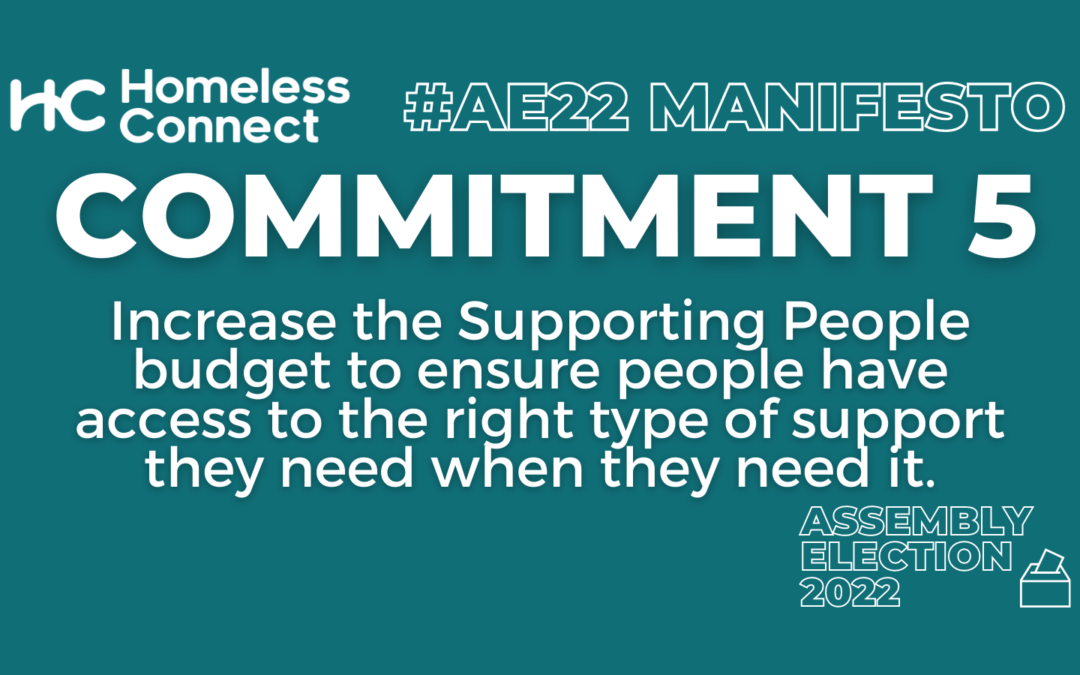 For all our Assembly Election 2022 coverage (including the rest of our own manifesto) click here.

Increase the Supporting People budget to ensure people have access to the right type of support they need when they need it.

One of the crucial funding streams for homelessness services here is the Supporting People (SP) programme. The fundamental purpose of SP is to provide support to services who are seeking to support vulnerable people to live independent lives.

Back in 2007, in what was a real victory for providers supported by the programme, the then Minister for Social Development made a decision to ringfence the SP budget. However, 15 years later the budget has not been increased. In fact, it was cut by 5% in 2018. By 2018, the value of the fund had been functionally eroded by 27%. With further inflation since then, this figure would be in the 30s by now. [1]

In the draft multi-year budget for 2022-2025 put forward by the Department of Finance earlier this year, it was proposed to increase the SP budget each year. While the proposed increase would not have made up for the gap in funding caused by the failure to increase the budget over the past fifteen years, it would have been better than no rise at all.[2]

However, with the collapse of the Executive and the failure to pass a budget the proposed increase has not been made. As we go in to the Assembly election, the future of the Executive remains unclear and it is impossible to know when the next budget will be set.

This situation has very real consequences for the homelessness sector and for those it seeks to support. Providers right across NI are struggling to recruit and retain staff as they are unable to offer competitive wages for roles which can be challenging. Some services are being reduced or long waiting lists are being created because the staff and resources available simply cannot manage the level of demand.

The number of households in temporary accommodation here in NI have risen by 74% over the last three years.[3] We are in the midst of a cost of living crisis which may well tragically tip some families over the edge into homelessness. In addition, providers are being hit by significant increases in energy and fuel costs as well as the rates charged for agency staff.

Unfortunately, we are aware that some providers are coming close to or are already at a critical point, with the potential for services to be curbed or even closed if additional funding is not provided. We are urging our political leaders to commit to increasing the SP budget after this election.

Failure to do so will have a detrimental impact on people experiencing homelessness here and on the sector trying to support them.

[1] “In Northern Ireland… Supporting People funding has remained ringfenced and has therefore been protected to some extent from the cuts which have been made by local authorities in England, in particular since that ring fence was removed. This is not, however, to say that Supporting People funding in Northern Ireland has not fallen in real terms. Core funding has remained static for the past 10 years. Although in some years this has been supplemented by additional discretionary funding, 2017/2018 research on cost pressures showed that over the previous nine years the capping of the Northern Ireland Supporting People core grant amounted to a real term cut of 27%.” See Nicola McCrudden, Mark Goldup, Tim Gray, John Palmer, Annie Field, Mia Rafalowicz-Campbell and Divya Krishnaswamy,  “Strategic Review of Temporary Accommodation”, October, 2020, https://www.nihe.gov.uk/Documents/Research/Homelessness/Strategic-Review-of-Temporary-Accommodation-2020.aspx?ext= para 3.6.

[3] Homeless Connect, “Political leaders urged to financially support the most vulnerable, as numbers in temporary accommodation continue to rise”, 10 March, 2022,