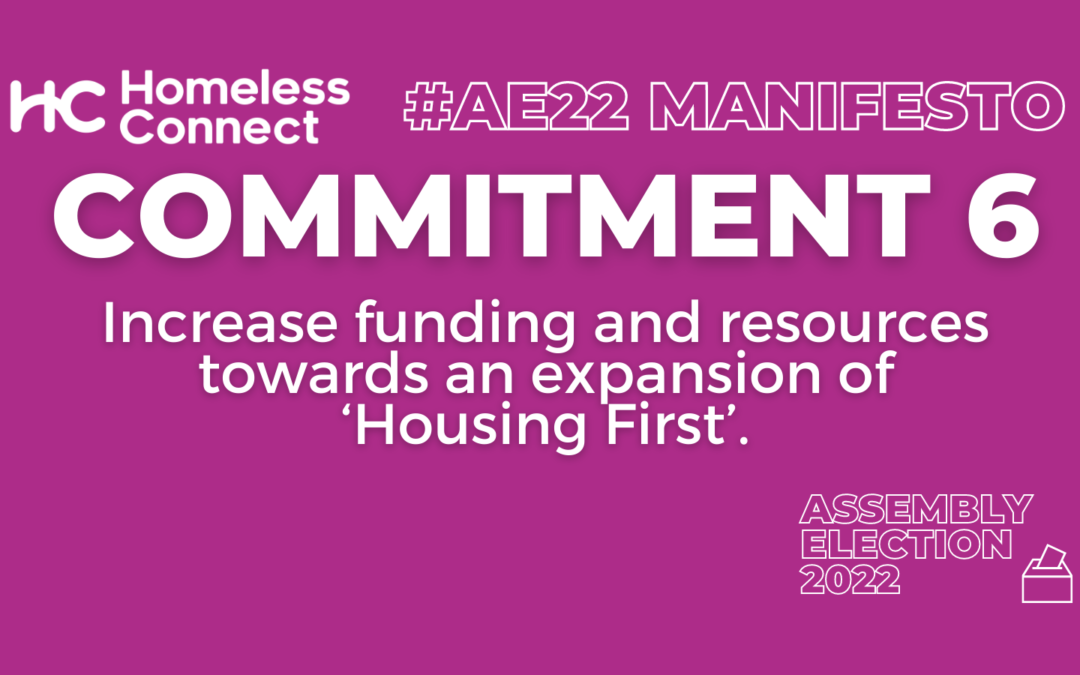 For all our Assembly Election 2022 coverage (including the rest of our own manifesto) click here.

Increasing funding and resources towards an expansion of ‘Housing First’.

The ‘Housing First’ approach was first developed in the United States in the 1990s. It is a policy approach particularly focused on those experiencing chronic homelessness.

As Pleace et al put it, “Housing First is designed as an intensive case management service that supports people who have high and complex needs, with experience of homelessness, in their own independent housing. The service provides housing as soon as possible, without expecting someone to demonstrate that they are ‘housing ready.’”[i]

The ‘Housing First’ approach contrasts with the traditional ‘stepped approach,’ which requires people experiencing homelessness to address behavioural problems such as, for example, addictions or challenges with mental health before they can access housing.

The ‘Housing First’ model has now been used in a wide variety of countries around the world. There is a strong international evidence base pointing to its effectiveness.[ii] The ‘Housing First’ approach has been introduced in NI, but only on a relatively small scale so far.

In some discussions around homelessness, it can sound like the introduction of ‘Housing First’ is the silver bullet which will solve every problem we face. This is not the case. ‘Housing First’ is an intervention which focuses on providing intensive support to a relatively small cohort of individuals experiencing chronic homelessness. For this group, it is an effective intervention and we believe its expansion is the right way to go forward.

Two of the action points in the Housing Executive’s Homelessness Strategy for 2022-2027 Year One Action Plan are to, “commission independent research on a feasibility study for Housing First for Northern Ireland,” and to, “expand Housing First provision.”[iii] We support both of these actions and look forward to seeing them implemented.

[ii] “The international expansion of Housing First has been driven in no small part by a rigorous body of evidence, including experimental studies conducted in multiple countries, of the effectiveness of Housing First in reducing homelessness.” Thomas Byrne, Minda Huang, Richard Nelson and Jack Tsai, “Rapid rehousing for persons experiencing homelessness: a systematic review of the evidence”, Housing Studies, 29 March 2021, 2.