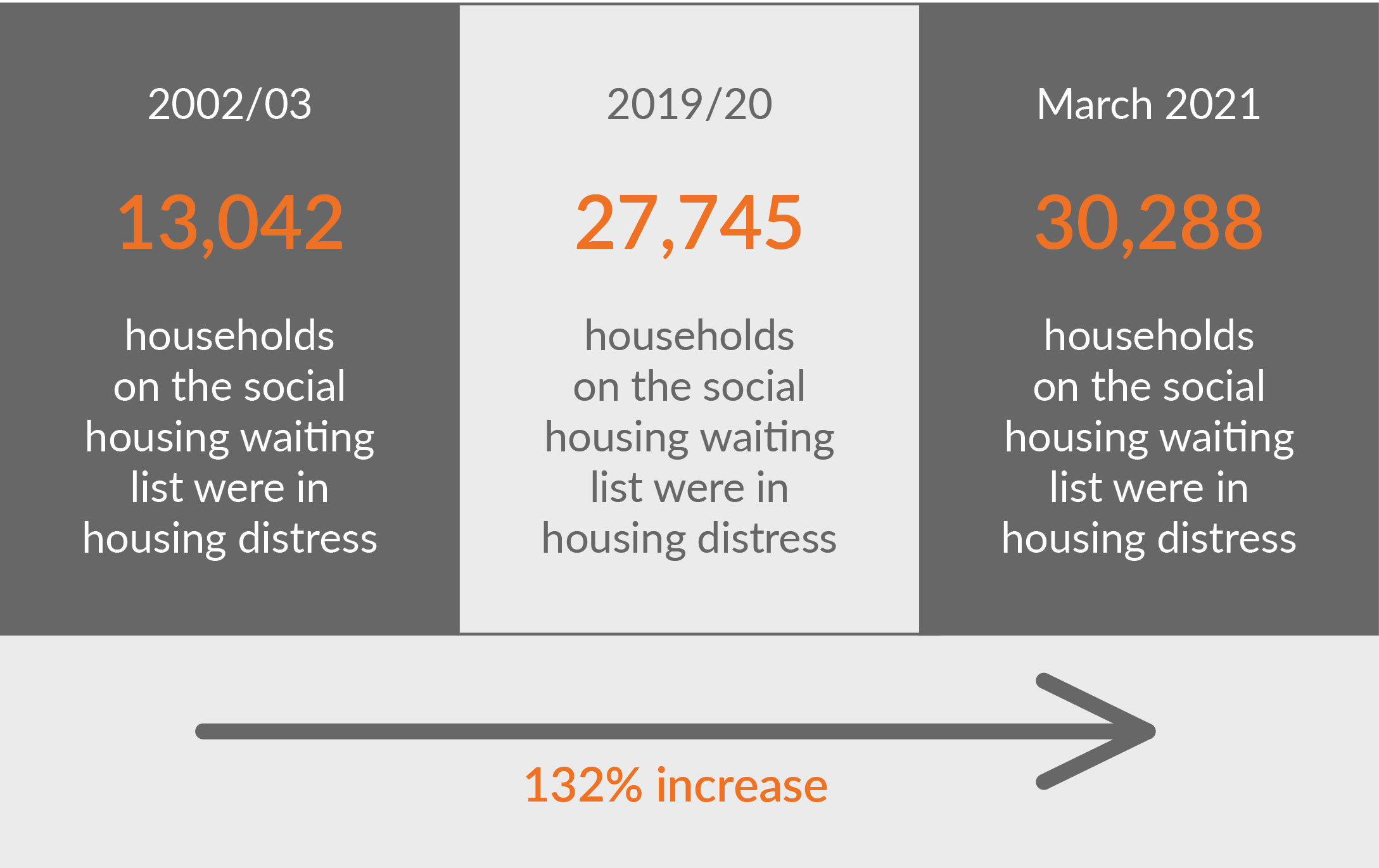 Before COVID-19 arrived, an increasing crisis had been growing around housing and homelessness in Northern Ireland. In 2002-03, 13,042 households on the social housing waiting list were found to be in housing stress according to official statistics. By 2019-20, this figure had increased to 27,745 households. COVID-19 and its associated impacts have made this situation even worse. By March 2021, 30,288 households were found to be in housing stress – an increase of more than 132% since 2002-03.

Stark Picture
By any estimation, these figures paint a stark picture. Behind these statistics are real individuals and families facing uncertainty and insecurity. As is well known and evidenced, the impact of housing stress and homelessness can be devastating for those who experience it.

Unfortunately, there are reasons to fear these figures may worsen in the Autumn. This is for two main reasons. First, the Westminster government’s furlough scheme is due to wind down. The end of this scheme is likely to lead to higher unemployment with all of the consequences this can bring for those impacted and their dependents. Second, at the time of writing, the government is on course to remove the £20 weekly uplift in Universal Credit at the end of September. While this may not sound like a huge amount of money to some, for those living with tight budgets it can make all the difference.

Universal credit cut
These two changes are likely to lead to increased financial precarity and poverty. While it is accepted that the furlough scheme has to come to an end at some point, the decision to end the £20 uplift is a choice on the part of the government which will have significant repercussions for some of the poorest living here. Tragically, it may push some households over the edge into homelessness. Alongside many others, CHNI urges the British government to think again before taking this step, considering the consequences it will have.

The difficulties Northern Ireland faces around housing and homelessness have been many years in the making. The COVID-19 pandemic has exacerbated trends which were already in motion. Quick-fix solutions to the growing crisis we face are unfortunately not available. If we are to turn this situation around, we need effective collective leadership from right across the Northern Ireland Executive, working with civil society to tackle the causes of housing stress and homelessness. We especially need to see reform of the legislation governing homelessness, to shift the focus towards preventing homelessness from happening in the first place.

“As a society, we do not have to fatalistically accept the situation we currently face as how things must be. With political will and concerted action a better future is possible.”

At the Assembly a new All-Party Group (APG) on Homelessness has been formed made up of members from a diverse range of parties to seek to drive forward positive change. CHNI provides the secretariat for the APG. The focus of the group in the coming months is on the critically important new homelessness strategy being developed by the Northern Ireland Housing Executive. The APG will be hearing from service users, accommodation providers and Executive officials on what the strategy needs to consider. It is our hope that the strategy will provide a clear direction which will lead to better outcomes.

As a society, we do not have to fatalistically accept the situation we currently face as how things must be. With political will and concerted action a better future is possible. CHNI and our members will be relentless in seeking that better future for the good of everyone at risk of or experiencing homelessness.

AS SEEN ON CAMPBELL TICKELL